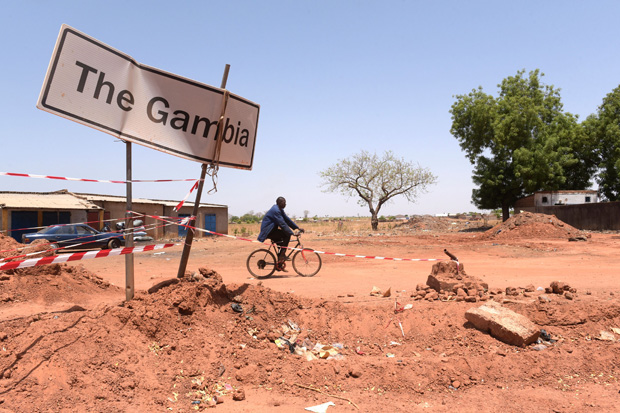 Today a very peculiar presidential inauguration took place. The President of the West African nation of The Gambia, Mr. Adama Barrow, after winning the election on 1 December 2016, was sworn in not in The Gambia but in the neighboring Sénégal. That was the first step of Mr. Barrow to take the reins of government of the smallest country on the mainland of the African continent. Now all he has to do is to go back to his country, accompanied by the Sénégal army and protected by Nigerian gunboats and aircraft to be installed as President. The thing is that Mr. Yahya Jammeh who lost the presidential election and should have stepped down today now claims that “God had made him President and that only God can remove him from this post” after he had conceded defeat at first. This is however not the first time that Mr. Jammeh has claimed to have a special celestial relationship. In 1997 he told the world that he can perform miracles and cure Aids at will. Mr. Jammeh came to power in a 1994 military coup that ousted Mr. Dawda Jawara who by then had been in power for 30 years.

Mr. Barrow can count on the support of the Security Council of the United Nations, most of the African countries and especially the Economic Community of West African States (ECOWAS) that has so far shown more determination than other regional organization to enforce democratic norms on the continent. Will Mr. Jammeh blink and leave office after all? Will the ECOWAS troops invade The Gambia and oust Mr. Jammeh? Whatever happens over the next hours and days, Mr. Barrow will be installed in Banjul, The Gambian capital. Most of Africa is not going to let anyone undermine the efforts to consolidate democracy and good governance in Africa in general. I am confident that African leaders are not going to protect autocratic despots anymore. I hope that the world is watching the wind of change blowing.

I lived and did voluntary work in 1989 in Barra Kunda, The Gambia.